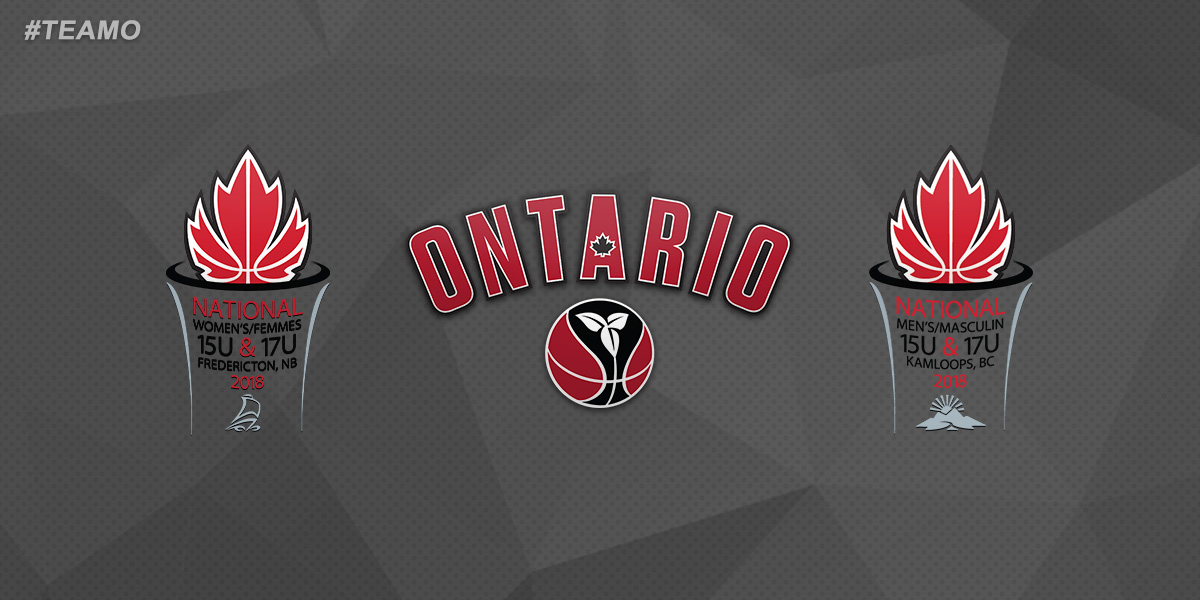 Ontario’s U15 Boys and U17 Girls concluded the 2018 Canada Basketball National Championships with gold medal victories on Saturday, August 11 in Kamloops and Fredericton, respectively.

Ontario’s U15 Boys captured their second consecutive Nationals gold with a commanding 84-65 win over Team Quebec.

Meanwhile, in a rematch of the 2017 Canada Summer Games final, Ontario’s U17 Girls—ranked No. 2 entering Nationals—defeated top-ranked Quebec, 67-56, to maintain the top spot on the podium at Nationals; the U17 Girls also finished first at the last two Nationals in 2016 and 2015.

In total, all four of Ontario’s provincial teams earned a spot on the podium, as the U15 Girls won silver and the U17 Boys claimed bronze.

In the U15 Boys final, Ontario was paced by Captain D.J. Jackson (Mississauga), who poured in a game-high 30 points to go with 13 rebounds.

Jackson was named tournament MVP after averaging 20.2 points and seven rebounds per game.

Head Coach Mike Selliah credited his team’s on-court success to the unselfish disposition of his players.

“The 12 athletes that represented Ontario at this competition really came together and bought into our style of play,” commented Selliah following his team’s gold medal win. “They were able to trust each other and execute throughout the week. We are very happy with their hard work and dedication.”

See the full box score for U15 Boys Team Ontario versus Team Quebec.

After falling to Quebec earlier in the tournament, Ontario’s U17 Girls responded with an impressive 67-56 victory in the gold medal final, limiting Quebec to just 35 per cent shooting while forcing 19 turnovers.

Besselink was awarded tournament MVP after averaging 12 points, 6.6 rebounds and 1.8 assists per game.

See the full box score for U17 Girls Team Ontario versus Team Quebec.

Ontario finished the tournament with a 4-1 record. The team’s lone defeat came at the hands of Quebec during pool play.

Team Ontario’s U15 Girls settled for silver after falling to British Columbia, 65-56, in the gold medal final.

Courtesy of their strong play throughout the tournament, Jegede and Zingaro were selected as First Team All-Stars.

Ontario reached the gold medal game after compiling an impressive 4-0 record, including a win over B.C. in their tournament opener.

See the full box score for U15 Girls Team Ontario versus British Columbia.

“It was a terrific effort by our guys today,” said Head Coach Jamie Campbell post-game. “Everyone contributed in this win. The team got better every day this week and it really showed in this effort.”

Ontario began the tournament with back-to-back losses against B.C. and Alberta, but rebounded to earn a hard-fought 81-77 win over Team Manitoba in the quarter-finals.

Ontario’s quest for gold, however, came to an end in the semi-finals as they fell to Quebec, 96-94, in overtime.

Across five games, the U17 Boys compiled a 2-3 record.

“It was a tough start to the week but we eventually started to buy in and come together as a team,” stated Assistant Coach Omar Miles. “We battled through adversity and won a bronze medal through a full team effort.”

Ontario’s defence improved exponentially throughout the tournament, culminating with a strong showing against B.C. on Saturday.

“We’re really happy with the commitment our guys made to the defensive end. We improved every day and after a slow start to the tournament, we began to gel as a team,” commented Lead Assistant Kevin Barnes. “We had several guys make big defensive plays. Darius (DeAveiro), Josh (Primo) and Josh (Bascoe) all took charges in our final three games and that really set the tone for our group.”

Look Back at the Action

Even though Nationals are over, you can still enjoy the highlights!

About Team Ontario
Team Ontario consists of the top male and female basketball players in the province in the U15 and U17 age categories, and the teams are a continual medal favourite at the annual Canada Basketball National Championships. Team Ontario’s coaching staff also represents some of the top coaches in Ontario. Between the four teams, Team Ontario has won gold at over 70% of the national championships since 2002.