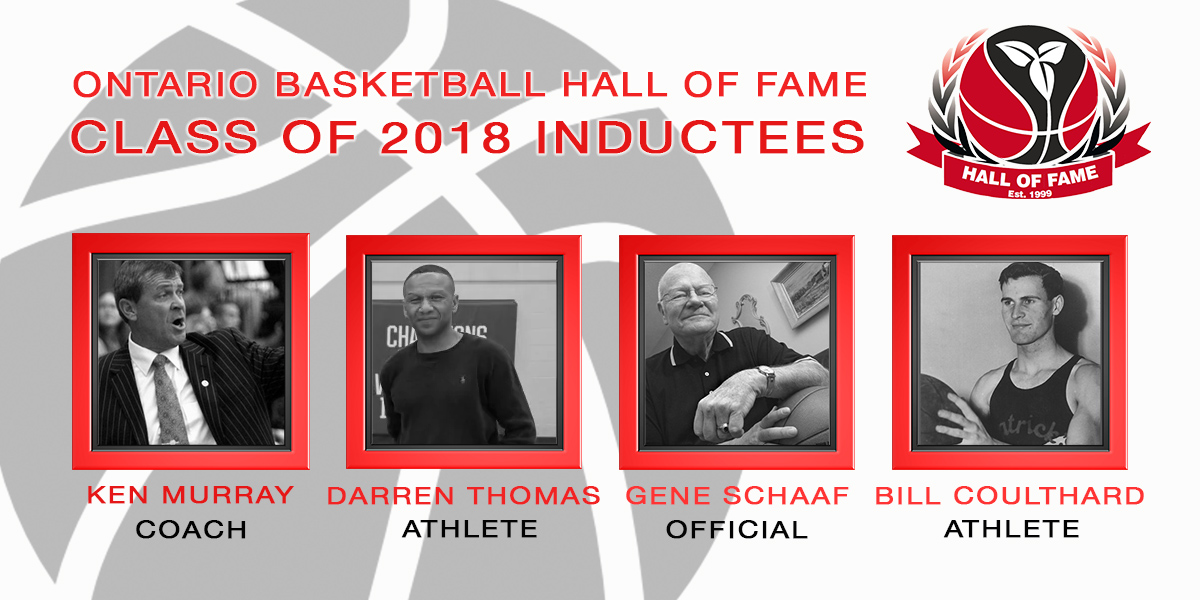 All four individuals have significant achievements in the sport and have made substantial contributions to basketball in the province.

Bill Coulthard (Athlete) is a highly regarded player from Windsor who enjoyed a successful basketball career on both sides of the border. Coulthard had standout success with Detroit Institute of Technology, Assumption College in Windsor and the 1952 Canadian Senior “A” Champions, the Tillsonburg Livingstons, which formed the basis of the Canadian Olympic team that year. He is also known for being a pioneer of the one-handed “long shot” in the Windsor-Detroit area.

Coulthard began his college career at Detroit Institute of Technology from 1942–1944. In his second season, he led his team in scoring and was voted onto the Detroit Free Press All-State Team.

In 1944, after serving with the Canadian Armed Forces, Coulthard began his stint with Assumption College in Windsor, where he was coached by Ontario Basketball Hall of Fame coach, Stanley “Red” Nantais (Class of 2012). The team won back-to-back Eastern Canadian titles in 1946 and 1947.

After college, Coulthard continued to play basketball as a player-coach for the Tillsonburg Livingstons from 1947–1952. The “Livvies” captured the 1952 Senior Canadian Championship, which qualified the team to represent Canada at the summer Olympics in Helsinki, Finland. Coulthard finished the tournament tied for second in team scoring with 9.5 points per game.

Even though he passed away in 2005, Coulthard continues to receive recognition for his accomplishments as an athlete. He was inducted posthumously into the Canadian Basketball Hall of Fame in 2013.

Ken Murray (Coach) is an accomplished basketball coach who turned the Brock University Men’s Basketball team into one of the top programs in Canada during his tenure from 1989–2010.

As head coach at Brock, Murray led the Badgers to their first National Championship title in 1991–92 and claimed a second national title in 2007–08. Murray guided the team to an additional five CIS Final 8 tournaments. He is a two-time CIS Coach of the Year (1989 and 1992), and he holds the record for most all-time wins in Brock basketball history with 535 in his career with the Badgers.

Prior to beginning his historic career at Brock, Murray was first head coach of the University of Regina Men’s Basketball team (1982–1989). He was named the Great Plains Athletic Conference Coach of the Year twice while at Regina. During his last season with the team, he led the Cougars to the final four at the National Championship and was named 1989 CIAU Coach of the Year.

Murray might be best known for his success as a head coach, but he was also an accomplished player at Brock. Murray played five years from 1972–1977 and was named the team’s Most Valuable Player all five seasons as well as Conference All-Star four times (1973–1976).

In 2011, Murray joined the St. Catharines Sports Hall of Fame as an athlete and a builder. Additionally, he is only the second individual to be named St. Catharines Sportsman of the Year twice, which he earned in 1992 and 2008 following Brock’s National Championship victories.

Gene Schaaf (Official) has been involved in basketball in many roles throughout his life, but he is most known for his extensive career as an official.

In addition to Schaaf’s many years of officiating for OFSAA, OCAA and OUA and at the provincial and national levels, he has been actively involved with OABO, IAABO and his three local boards in multiple roles including secretary, treasurer, interpreter, evaluator and assignor. He sat on several OABO and IAABO committees, and he has served on the Board of Directors for OABO as well as Ontario Basketball.

Schaaf was instrumental in the creation of YRABO, where he was an assignor for 40 years. With DRBABO, he has held Executive positions in various roles. Schaaf is still involved with his local boards, attending membership meetings and supporting training and evaluation activities.

OABO, IAABO and all three officiating boards have awarded Schaaf honourary lifetime memberships in recognition for his dedicated commitment to officiating development within each organization. Additionally, Ontario Basketball recognized him with an honourary lifetime membership and a Lifetime Achievement Award, and the Canadian Association of Basketball Officials presented Schaaf with the John A. (Wink) Willox Award.

Despite standing only 5’7″ tall, Darren Thomas (Athlete) has made a big impact on the sport from his days at Runnymede Collegiate Institute, Simon Fraser University and University of Guelph and later as a broadcaster.

Thomas first gained recognition at Runnymede in Toronto, where he led the team to three straight OFSAA finals appearances. Runnymede won silver in 1984 followed by back-to-back gold in 1985 and 1986. Thomas’ success as starting point guard and captain earned him All-Star and Most Valuable Player selections at several high school tournaments as well as city-wide recognition as a two-time Toronto Sun and Toronto Star All-Star and three-time City TV Athlete of the Week. In 2002, Thomas became a member of the Runnymede Wall of Fame.

Thomas received a full scholarship to play at Simon Fraser University in British Columbia from 1986–1989, where he was coached by fellow Ontario Basketball Hall of Fame inductee, Jay Triano (Class of 2000). Playing in the NAIA against American schools, Thomas led the team to the school’s first 20-win season as a rookie starting point guard. The following two years, he was a back-to-back NAIA All-Star. In his junior year, Thomas was team captain and he led the team in scoring and assists. In 1988, he was selected to Canada’s National B team, an assembly of the best university players in Canada.

In 1990, Thomas transferred to the University of Guelph, where he led the team in scoring with 15 points per game while shooting an incredible 53% from the three-point line. The OUA West All-Star led the Gryphons to the 1991 CIAU Championships, where they finished with a silver medal.

After college, Thomas had several offers to play professionally in Europe, but he decided to pursue his career instead. He began working for the Region of Peel in Human Services and he became an analyst for Rogers Television, covering all levels of basketball. Thomas has been involved with the Toronto Raptors Ambassador program, Toronto Argonauts Courtside Boatmen and Toronto Sports Media basketball team, which helps raise funds by playing charity basketball games. He has also taken on the role of coach for his son’s basketball team.

To see the full list of inductees, visit the Ontario Basketball Hall of Fame.