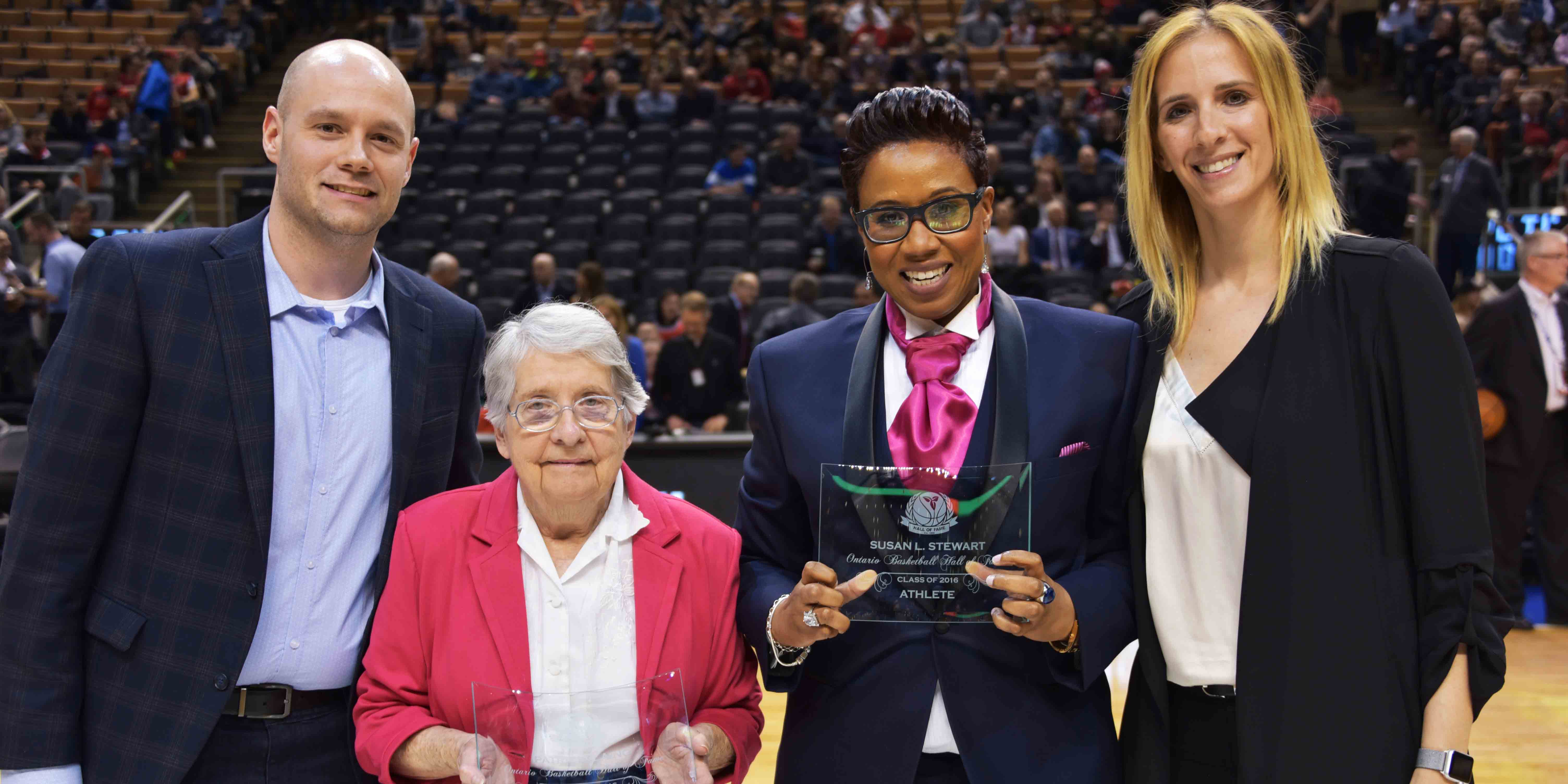 It was a night to remember the past and celebrate two incredible women who have impacted the game of basketball in Ontario like few others.

Susan Stewart and Patricia (Pat) Laing have officially been inducted into the Ontario Basketball Hall of Fame with a memorable event on March 21 organized in their honour.

Their contributions to the sport as a player and as an official, respectively, are greatly appreciated.

“It was our great honour to recognize two distinguished women who were great on the court and are even better people off of it,” said Jason Jansson, executive director of Ontario Basketball. “I felt honoured just to be in the same group photo as Sue Stewart and Pat Laing. I also want to thank all those who came out to show their support on induction night and make it a special affair for everybody involved.”

The Hall of Fame evening began with a reception and cocktails at a downtown Toronto restaurant where conversation flowed and speeches were made. Afterwards, a large group of the attendees made their way next door to the Air Canada Centre to continue the celebrations while watching the Raptors top the Bulls in overtime. There was a special presentation at centre court during halftime to recognize the inductees in front of the sold-out crowd.

Fonthill-native Pat Laing has spent much of her time on basketball courts over the course of her legendary 42-year career as an official. She first picked up a whistle in 1958 and retired in 2001, though she remains an active member of the International Association of Approved Basketball Officials (IAABO).

“Many rewards from my roles in officiating circles have come my way,” said Pat Laing during her speech at the reception. “The opportunity to attend seminars and clinics across the province and to meet some wonderful people to have as officiating partners, long-time colleagues and friends. Thank you to Ontario Basketball for all their work to support the game of basketball, and thank you to the Hall of Fame Selection Committee for this distinguished award.”

The loud cheering during the halftime induction at the Raptors game was Sue Stewart’s large contingent of family and friends who showed up to celebrate the 22-year playing career of the former Olympian. Stewart remains heavily involved in her hometown Mississauga sports community and is a motivational speaker and the author of her 2005 autobiography, Unbreakable.

“My sincere appreciation to those who took the time to mentor, inspire, believe in, and guide me. You are the special ones who made me believe in me,” said Sue Stewart during her speech. “I have learned so many lessons playing this game including sometimes when you win you still lose and sometimes when you lose you can still win. I am deeply touched by the number of people who came out to celebrate and support me; thank you.”

Ontario Basketball would like to extend a thank you to Maple Leaf Sports and Entertainment who facilitated the halftime induction at the Raptors game, to HUB International for allowing the use of their corporate box to watch the game, and to Nothers who supplied the beautifully crafted awards the inductees received and the signature keychains for all of the guests.

Every two years, OBA accepts nominations for the Ontario Basketball Hall of Fame to honour individuals and teams who have attained incredible success and made outstanding contributions to the sport of basketball in Ontario. Candidates are nominated by their peers in one of the following categories: athletes, coaches, builders, teams or officials. The Hall of Fame Selection Committee votes to determine the inductees in each bi-annual class.

Anyone interested in nominating a candidate for the Hall of Fame Class of 2018 should submit a Hall of Fame nomination.