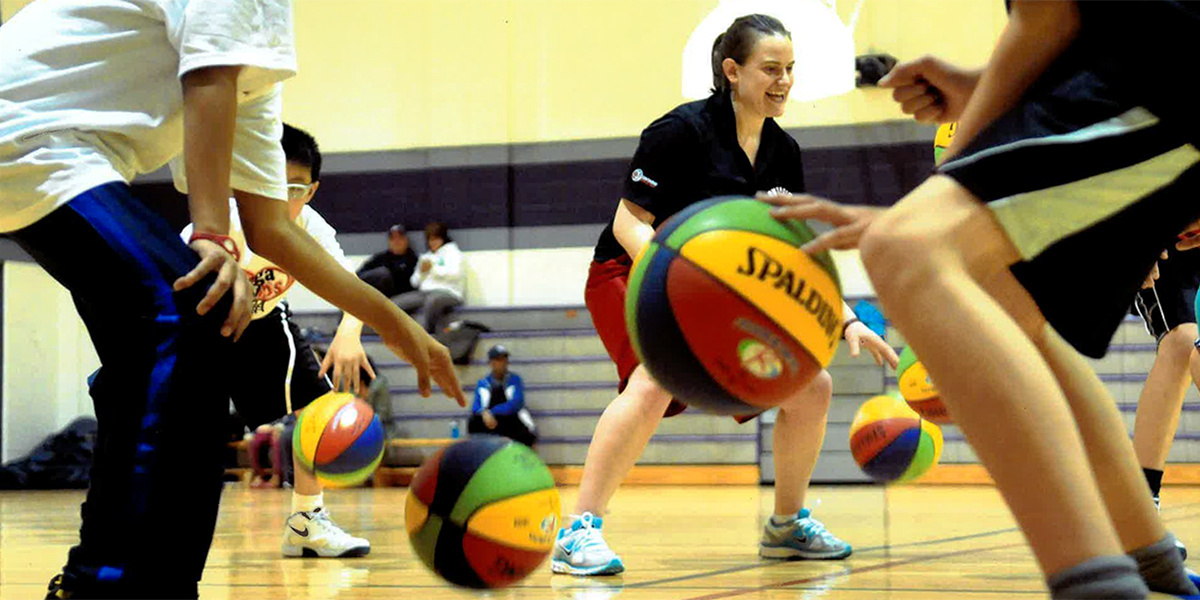 Over the past nine years as Ontario Basketball’s Senior Director of Basketball Development Lindsay Walsh, who everyone knows simply as Lou, has been at the forefront of basketball’s rapid growth in the province. Through her multifaceted role which included overseeing both High Performance including Team Ontario and the launch of the OSBA, as well as Community development including Mega Hoops and in-school programs at the grassroots level she’s made an impact through our sport on countless young lives. She will bring her energy with her when she moves closer to home back in Nova Scotia to become a teacher starting in the Fall. We talked to her about her time with OBA and bring you this Q&A to read,

OBA: Here comes the softball question. What has been the best part of working at OBA?

LW: Well it’s probably being paid for my passion. It didn’t feel like a job, you know? I would never be where I was without basketball and what the sport had done for me as an athlete and more importantly a person. Then to have the opportunity to have that impact in one of the largest provinces in the country – that’s an honour.

OBA: And as far as the day-to-day environment?

LW: Working alongside all the ‘basketball crazies.’ The people that put that much time into basketball development and made me feel… normal. Like when we’re hitting hour 12 in a gym and we’re all still just as invested, you feel like you’re at home. I’m still at home in a gym. The commitment of the stakeholders… they’re just as nuts about this game as I am.

OBA: What drew you to Ontario Basketball in the first place?

LW: Definitely my passion for basketball. When I ended my athletic career I felt lost, as most of us do, so I went into officiating and did my Master’s in sport psychology and started coaching. Again, because I think basketball’s been a major part of my identity growing up I wanted to stay involved because I understand myself most in those environments. I applied at OBA and made a “100 Day Plan” that was about 30 pages long – it took me eight years to get through the plan! (Lou’s laugh)

OBA: Was there a specific moment you think you enjoyed the most? Probably an unanswerable question…

LW: Every single person I built a relationship with I can tell you a specific moment. You know what I mean? I can name so many moments around people who love basketball. I love people.

OBA: I picture you on court delivering a Mega Hoops clinic and grinning from ear to ear.

LW: Yeah! In my heart I believe in the organization’s mission, vision and values and I lived it and I think people felt that when they were with me.

OBA: And you had a lot of your own vision for the organization – causes and things you believed in. Gender equity and partnering with community organizations. Did you use your role to bring some of these initiatives to basketball?

LW: I don’t think it was ever a conscious thought, I think it was shaped through my experiences as a female in the sport which often times tended to be negative ones associated with my gender, and I channeled that emotion into drive to make things better for girls and women. I overestimated the rate of change, but regardless of the cause, the goal was always to being a position where I can make a positive impact in at least one person’s life.

OBA: One of these great successes was getting a women’s high-performance league in the OSBA which wasn’t necessarily on the radar for other groups starting prep programs but you knew the talent of the athletes out there.

LW: When we sat around the table and talked about launching the OSBA I was adamant that it was going to be men’s and women’s and that it would be equitable and I made sure it was written in our strategic high performance plan that in Year 2 we launch the women’s league and I got that commitment.

OBA: What was the concept of the OSBA and what role did you have?

LW: Early on coaching with Team Ontario, it became apparent that high performance athletes were suffering from the lack of alignment between programs in Ontario, being pulled in so many different directions. It seemed as though each stakeholder group was following their own game plan and so began my commitment to collaboration and alignment amongst the many stakeholders in the province, with the goal of ensuring athletes had access to a high performance daily training environment and competitive structure.  Ontario athletes were being successful on a national level but we were limiting them by just saying they were successful by beating other provinces with smaller talent pools. We needed the high performance daily training environment and the competition structure in Ontario to help these athletes go on to be successful at the international level.

OBA: And it still has room to grow. Of all the initiatives – and you have had lots of ideas – what do you see as Ontario Basketball’s greatest opportunity moving forward?

LW: I don’t think the basketball community in Ontario is anywhere near its full potential. It has been an everyday commitment to preaching about alignment on behalf of the athlete but we still have people working outside the system. If people could learn to work together I’m certain we could reduce drop out rates ultimately give more children the opportunity to benefit from sport.  One major  problem is the hyper competitive structure that starts at U10. That’s one of those painful things leaving this organization that I haven’t been able to have an impact on. We’re still putting kids that are 10 or 11 years old in hyper-competitive situations and still have a dropout rate of 70% at age 13. It’s created a competitive monster that doesn’t help athletes no matter what pathway they’re on, eventually they get burnt out, lose enjoyment in the sport and end up leaving.  The hyper, stressful, over emphasis on winning creates a toxic environment for everyone in the gym, including our officials, it’s just so counter to the foundational purpose of sport – to enrich our lives.

OBA: Will you coach again in Nova Scotia?

LW: I will always be apart of basketball, one way or another. I’m looking forward to being in an environment where the opposition’s parents are cheering for you too saying “good job” and “good try.” Sports can lift you up. I’m looking forward to creating a positive environment and help young people overcome challenges and learn about themselves. With the accessibility and diversity of our sport we have a huge opportunity to make a difference in the lives of the next generation.

OBA: You would have traveled with Team Ontario to Nationals almost every year – were you secretly always rooting for Nova Scotia?

LW: I always had a blue shirt on under my OBA gear (Lou’s laugh). I was thinking about this. One of the best basketball games I ever watched was Ontario vs Nova Scotia in Halifax when Nate Darling went off for 50 points and RJ Barrett was young and playing up an age group with Ontario. I’ll watch an ant compete with another ant for a piece of cracker, I don’t care, I love competition. I don’t know that I rooted for one province over another. I’m invested in basketball in this country and enjoyed watching young athletes develop and compete.

OBA: Hey to wrap this up now that you’re going into the classroom how will you take your experiences at OBA and apply them with your students?

LW: Oh my gosh. Honestly this has been the best eight-year practice teaching position I ever could have had. It has shaped everything in terms of my ability to present and feel confident, my understanding of how to communicate and create environments where children can learn. I’ve developed a patience for understanding everyone on a different pathway to learning and there are so many ways we can engage children. I think about my classroom and it’s going to be a mini gym – it’s going to be stations, rotations, timing, cheering, reflection. I’m taking the gym into the classroom and some people might think it’s chaotic but thats how we learn, by engaging with our environments.