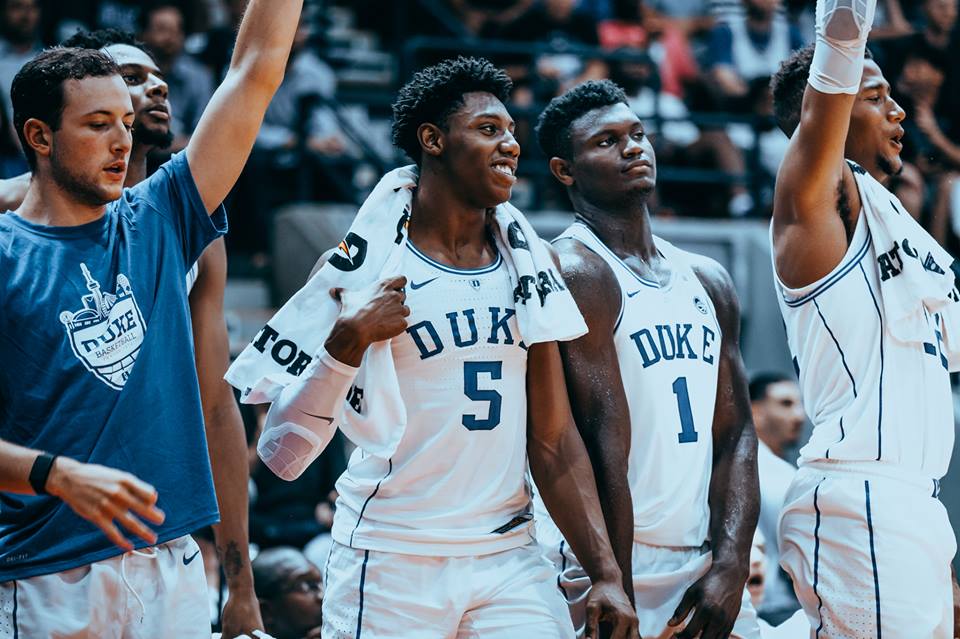 It was a night of celebration, an affair that marked the (un)official commencement of R.J. Barrett’s college career.

Playing in his hometown of Mississauga, Barrett, who headlines a stout Duke recruiting class, poured in a team-high 34 points to go along with five rebounds and two assists, as the Blue Devils tipped off their 2018 Canada Tour with an 86-67 victory over the Ryerson Rams on Wednesday, August 15.

Barrett, 18, received an adoring ovation from the Mississauga faithful during pre-game introductions, a fitting coronation for Duke’s new star.

“It was a surreal feeling, and a great experience,” commented Barrett post-game. “There were plenty of familiar faces in the crowd. I was proud to have everyone come out and be able to support me and my teammates.”

Together, Barrett and Williamson engineered the bulk of Duke’s offensive output, accounting for 25 of the Blue Devils’ 34 made field goals.

“Me and R.J. have a really good chemistry,” said Williamson. “We were roommates over the summer, so we developed a very good brotherly bond. Me and him have a connection on the court that we can both know what we’re about to do with the ball.”

Legendary Duke head coach Mike Krzyzewski, a five-time National champion and the winningest coach in NCAA Division I history, was encouraged by the play of his star freshmen and expects their relationship to further blossom as the regular season nears.

“Those kids are all about winning. They’ve got it. R.J. and Zion hooked up a few times tonight and that’s a good thing,” stated Krzyzewski. “When we get our full complement of players, I think we’ll hook up even better. They’re really good kids and this is a good learning experience for them.”

It didn’t take long for Barrett to announce his arrival on the collegiate stage, as the Canadian phenom sent a charge through the Paramount Fine Foods (formerly Hershey) Centre with an emphatic and-one dunk during the closing stages of the opening quarter.

Later, it was Williamson who ignited the crowd, throwing down a vicious put-back slam followed by an equally-impressive alley-oop finish.

Ryerson did its best to challenge the mighty Blue Devils, deploying a variety of defensive alignments, ranging from a full-court, 1-2-2 press as well as a 2-3 zone.

The gamesmanship garnered praise from Coach K, who was pleased with the level of competition on the floor.

“That was a good game for us,” said Kryszewski. “Obviously they’re a really good team and have a great tradition … I thought we were real nervous to start the game. We had seven turnovers in the first quarter. They were good, so they forced them … That was a good start of the trip.”

Kryszewski has coached some of the game’s all-time greats, including a handful of current NBA professionals. His opinion, unlike most, carries significant weight.

And so far, Barrett, his star pupil, is eliciting rave reviews.

“Every day he shows his maturity with how he handles things. His relationships with the coaches and with me are great. He’s comfortable and he’s a man,” declared Kryszewski. “He’s so mature in his relationships and that makes it good for everyone. He does it every day … He’s a special kid and a special player.”

The 2018 Duke Canada Tour will continue on Friday, August 17 as the Blue Devils take on the University of Toronto Varsity Blues at the Paramount Fine Foods Centre. Tip-off is scheduled for 6 p.m. ET.