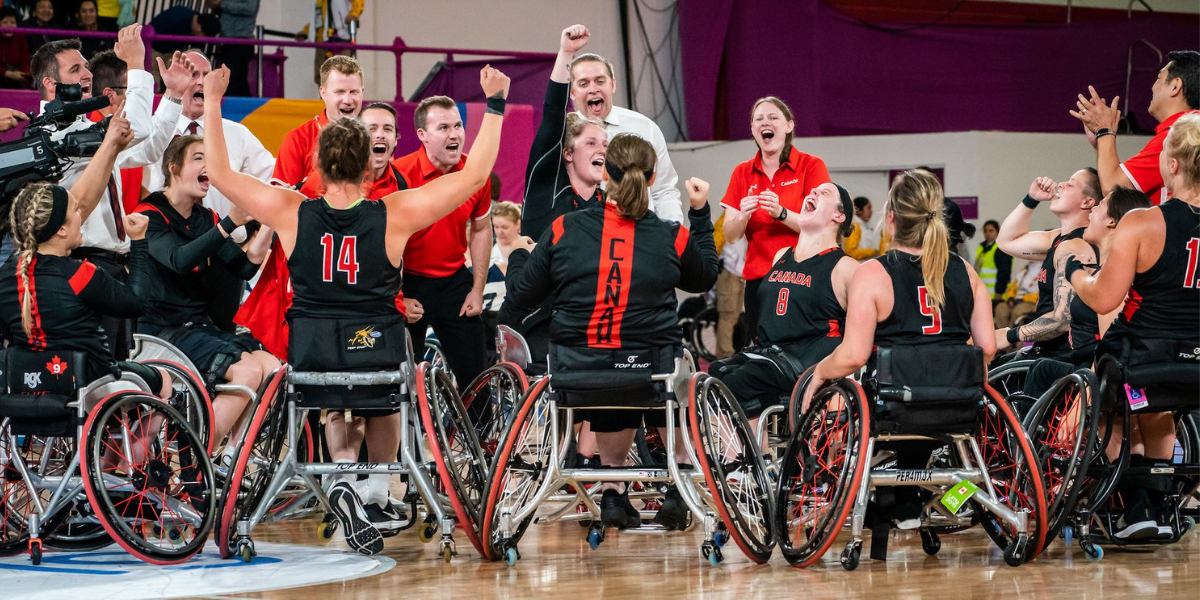 The Canadian women’s national wheelchair basketball team won gold at the 2019 Parapan Am Games in Lima. They defeated the USA 67-64 in a hard-fought and extremely close gold medal match. This game was a rematch from the 2015 final when the USA edged Canada 80-72.

Ontario Basketball’s own Erica Gavel, who currently serves as Secretary on OBA’s Board of Directors, brings home a gold medal as part of this incredibly successful team. We caught up with Erica once she returned home from Lima to ask her all about the back-and-forth final.

“We just stayed together and played as a team,” said Gavel. “Deep down, we knew we could rely on each other. We’ve worked really hard on team cohesion this summer, and it showed in both the semi-final and final. I am so proud and honoured to be a part of this team.”

The parallels between the 2015 Final in Toronto against the American team were striking and players on both sides remarked how the game was similar though many of the players different.

“Both teams are very different from 2015,” remembered Gavel. “For us, we were focused on improving and doing well in Tokyo 2020. Beating the Americans was a step in reaching that goal.”

Kady Dandeneau, who was born in Peter Island, BC but resides in Toronto and plays for the Rollin’ Raptors Div II, had a triple-double in the game. Arinn Young (Legal, AB) had 20 points, 10 rebounds. This is Canada’s sixth consecutive appearance in the gold medal match, having won gold in 1999 and 2003 and silver in 2007, 2011, and 2015.

“The entire experience in Lima is difficult to describe. Over the last 3 years, the goal has been to do well at this tournament. To qualify for Tokyo 2020 and win gold is just a dream come true,” said Erica. “The entire experience in Lima was tremendous. From the venues, to the games, to the volunteers, and the cleanliness of the athlete village, it was an incredible 18 days.”

Canada, the USA and Brazil all qualify for Tokyo 2020 as the top three teams from Lima. The focus now is to prepare for Tokyo, however, the team will first take some time off to celebrate and to recharge.

Gavel is now completing her PhD, supervised by Dr. Heather Logan-Sprenger, who was a dual sport athlete in hockey and cycling herself. Gavel and the rest of Team Canada will take a few weeks off and then return to training in October as they begin the road to Tokyo. Congratulations to Erica and all of Team Canada on this incredible achievement!

Despite a tough loss in the gold medal game, 76-43 to USA, they come home with a 5 and 1 record and a silver medal in hand and can begin their preparations for Tokyo. Ontarian Patrick Anderson (Fergus, ON) was the second leading Canadian in the game with 11 points. Nik Goncin of Regina, SK dropped 12 points in the loss.

Congratulations to both the men’s and women’s national wheelchair basketball programs on their incredible achievements in Lima. Good luck to all in Tokyo!

Statistics and photographs used in this article are sourced from the Wheelchair Basketball Canada website. Check out the WBC website for additional photo galleries, individual players stats and bios, etc.